You may have seen that the Department of Labor is going after Google for “extreme” gender pay discrimination. You can read the latest Google response via a blog post here.

So what’s happening and why does this matter?

Keep in mind that tech companies are especially notorious for gender hiring and pay issues. Many articles have addressed the ongoing struggle to keep women in technology-related jobs, and there is even a website/network dedicated to women empowering others in these roles: www.womenintechnology.org

Since the technology field is already dominated by men, it is only natural that there exists a potential for bias, either deliberate or unconscious, against others “not like me,” including gender and race/culture. Google’s own published workforce statistics for their technology jobs support some of this behavior: 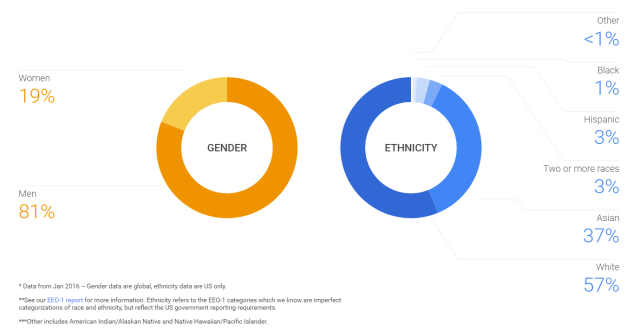 So why does this matter? Can’t Google hire who they want and pay their employees what they want?

Well, no, they cannot. Google is a Federal contractor, so they are subject to the pay practice rules of the OFCCP (Office of Federal Contract Compliance Programs), which requires Federal contractors “take affirmative action to ensure that applicants are hired and employees are treated during employment without regard to race, creed, color or national origin.” Gender was added in 1967, but apparently it takes more than 50 years to get the task accomplished!

It also matters because Google is a household name – it is even the verb we use for searching for something online! So, Google should know that they are a huge target for any compliance concern. They should be preemptively monitoring their HR practices and procedures for any potential issue, but apparently they were behind on that front.

The initial charge from the OFCCP/Department of Labor was for gender pay discrimination from 2014 to 2015, and the suit was filed in court in 2016. Note that in the Google blog post cited above they note “In late 2016, we performed our most recent analysis across 52 different, major job categories, and found no gender pay gap.” Is that too late? What about 2015 data? Looks like they still have a legal issue from that time frame.

I do appreciate that Google has published their compensation process online here: https://rework.withgoogle.com/guides/pay-equity/steps/introduction/. This is a valuable resource for other employers to use in their own compensation strategies. The blog post also notes that Google “recently expanded the analysis to cover race in the US.” That makes me cringe, because they actually should have been considering race before they were required to consider gender in pay equity issues, according to the OFCCP rules.

There are some lessons for all HR/Compensation managers from all of this:

These are not easy steps for HR – we are often already considered the bureaucracy/red tape. However, this is one front that is worth pushing back on and your legal team will thank you when you can defend your decisions in court (and can back them up with the statistical data as evidence).

This site uses Akismet to reduce spam. Learn how your comment data is processed.